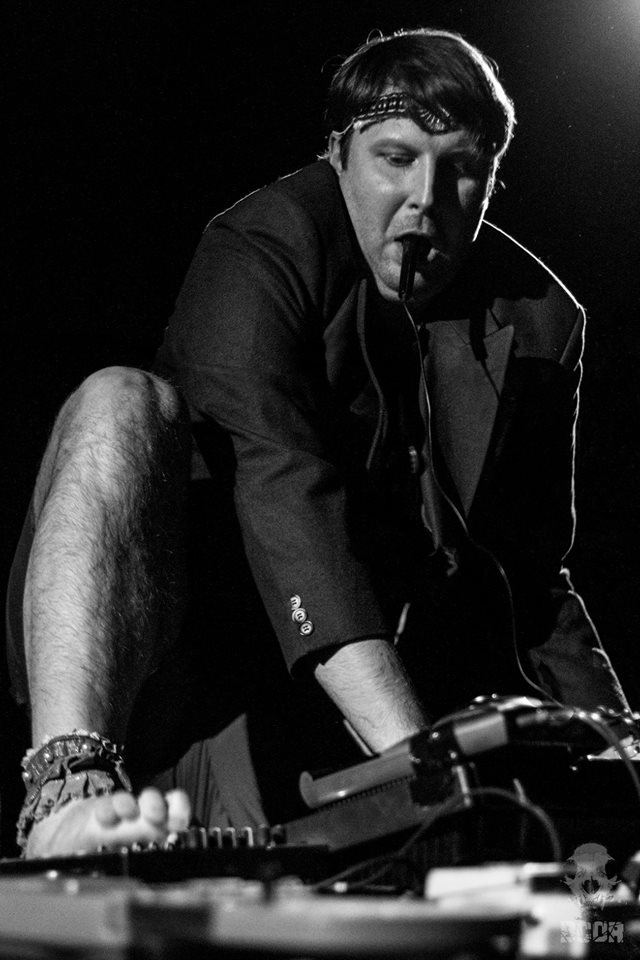 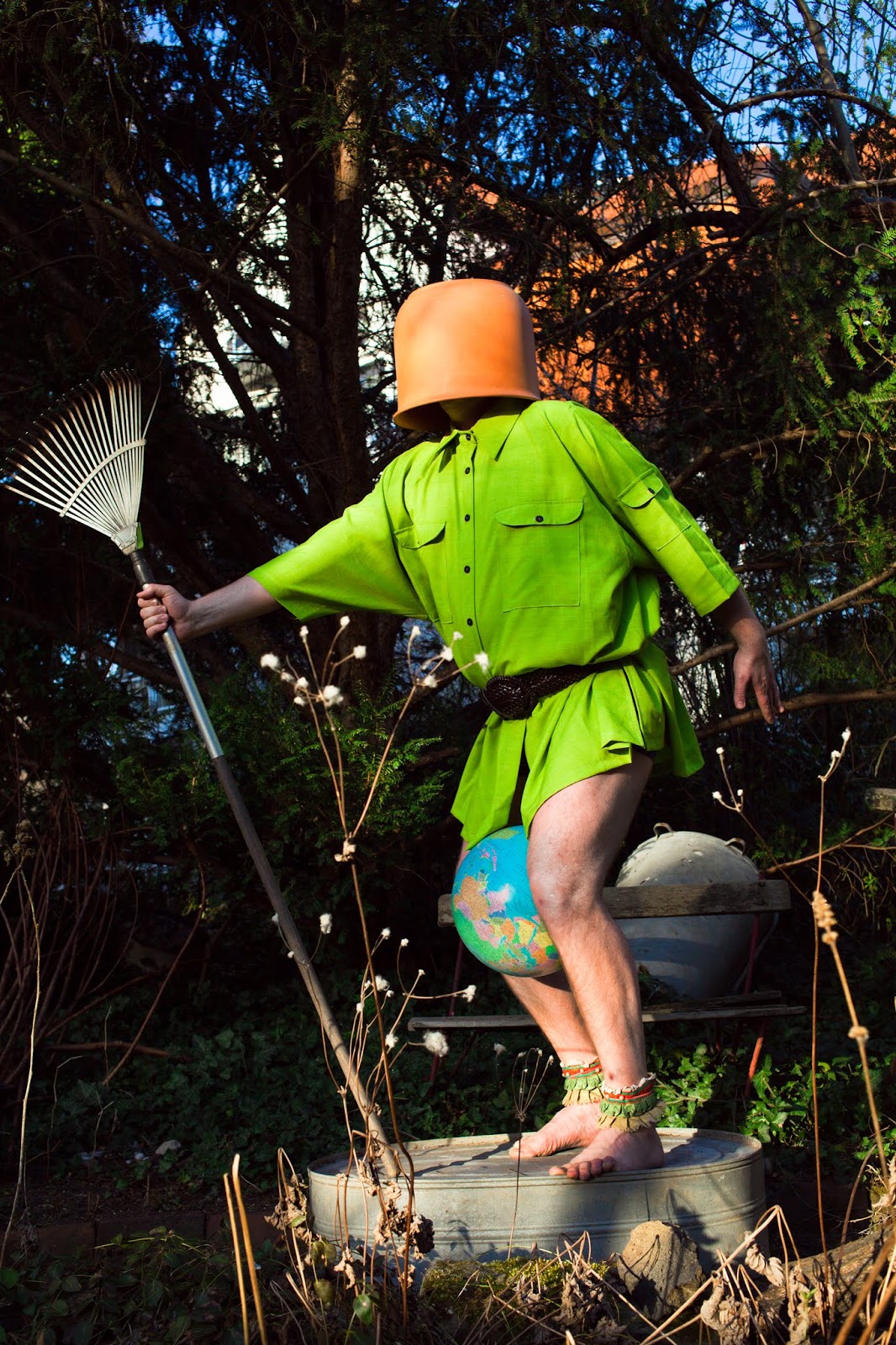 We join the celebrations, 20 years of undeground for Arma Agharta (Lithuania), one of the most active and most interesting artists of the moment, with more than 450 performances in his baggage between festivals and concerts and three world tours. There is a lush middle ground between noise music and performance art that appears when visible elements take the same importance of sound ones. The possibilities are so many how much are the artists who make them: from clowncore to the use of masks, from the choreography to the minute gesture that turns into sound. With its dada flavor performances, Agharta created an original language focused on the performer as a producer of sounds and the sound itself. What better element of irony, destructive and vital, could connect this kind of work to the DIY (Do-It-Yourself) aesthetics and to the anarchic context of sound experimentation? 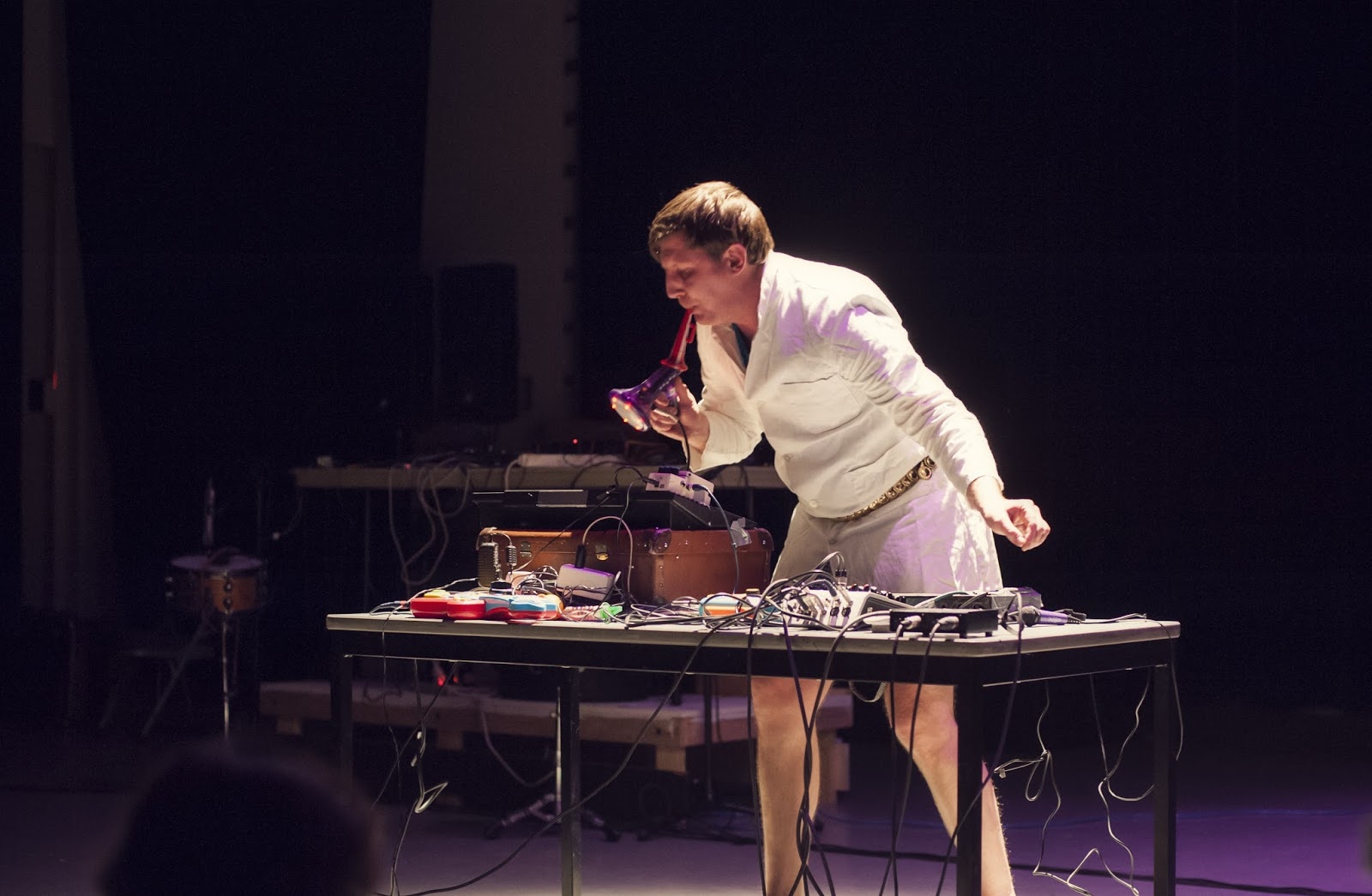 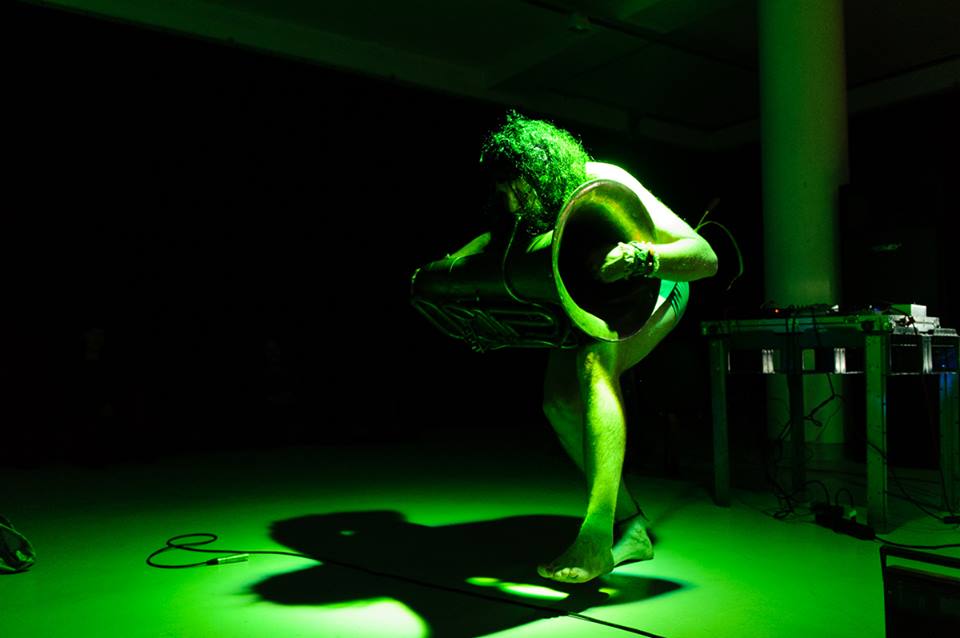 20 years in the worldwide underground, from the DIY aesthetics to now.

How can you describe your way starting from Sperm Oil? How does this scene changed in these 20 years?

Sperm Oil (by the way this is not what you think! – check dictionary) zine was my first step into worldwide underground. I was totally fresh editor/reviewer/publisher, learning how to do it from zero, just by seeing examples. By that time, in 1998, there were still a lot of zine publishers all over, including Lithuania and by feeling this, i got hooked by the idea to do mine.  People were sending records for review, so this is how I found out about the huge exciting musical underground.  Later a lot of other related activities followed, including running a label, organizing concerts and festivals, organizing tours and playing myself, but basically I would describe my way as a constant search for freedom by the form of sound. First getting into punk, then into more extreme stuff, later discovering electronic noise, free improv and eventually stepping aside from any genre and looking for my own sound.
Of course things changed a lot in those 20 years, it’s even hard to summarize, but I think that now Lithuanian scene is the most rich and diverse as never. Quite many new, young artists, more and more events, and not only in big cities. Some artists from the older generation are also still active and nice to see when different generations meet in the events. Not so many labels and writers though, but the live interaction with people in the events for me is the most important these days and i think that keeps the scene most. 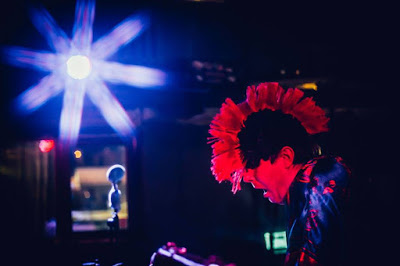 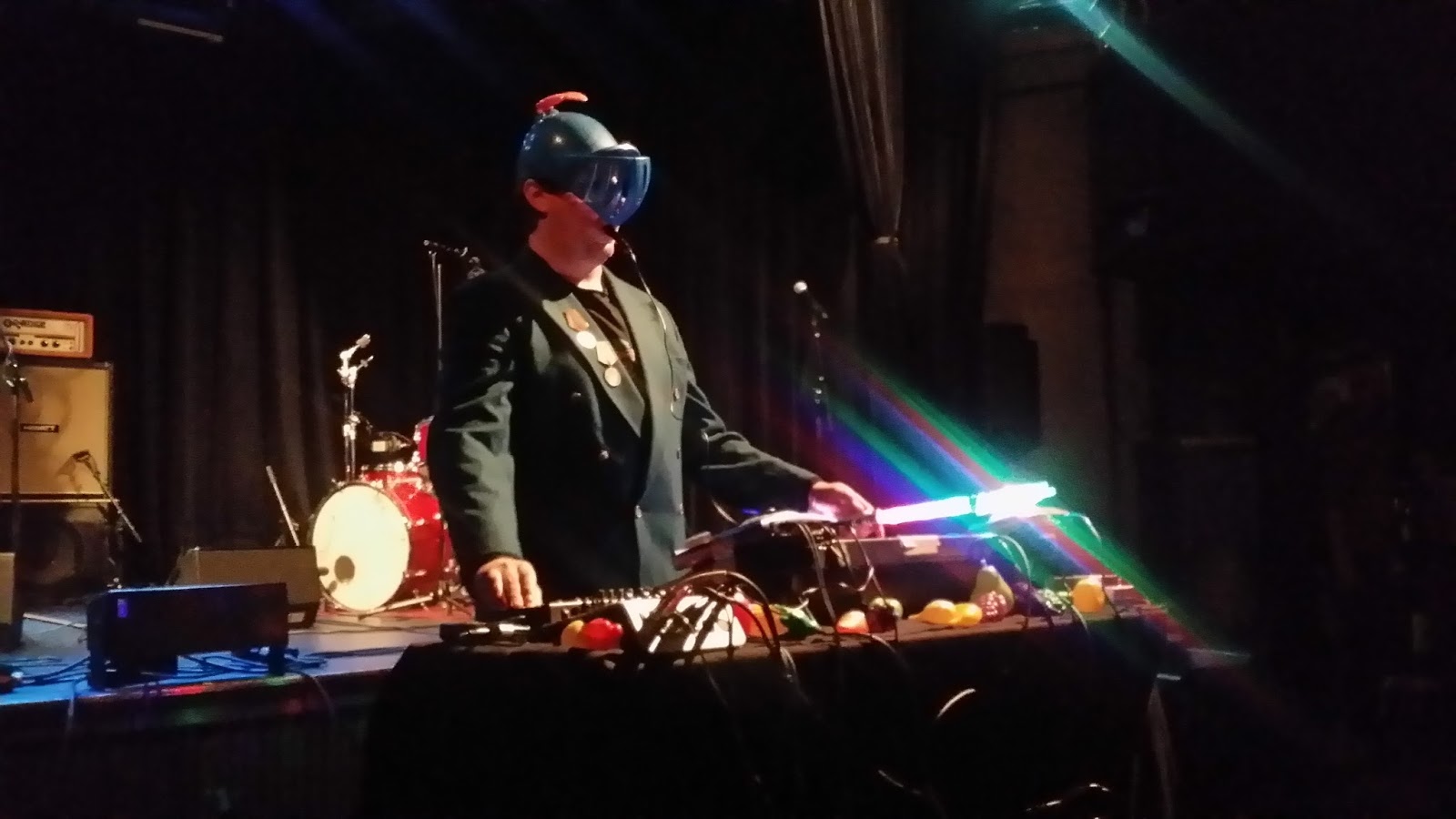 What about your decision to publish just tapes?

Naturally. First tape was released in 2008 in Russia and after that I didn’t get any offers to release in other format, maybe there was some CDr or even CD release possibilities, but it was usually for the compilations.
I consider my sound lo-fi and cassette format is best for such sound. Though I’ve been discussing with one American label about lathe-cut release. This idea is interesting, and let’s see if it will happen. I even don’t have record player though, vinyl format was never so much attractive to me. Don’t know why, maybe because it’s just too big.

Anarchism and venues all around the world. I think you have seen several in your three world tour.  Can you give us some virtuous examples  in terms of artistic experimentation and new ways of governance?

Can’t say much about it. I never thought about this question. But basically community based DIY spaces we could consider as anarchist type, right? And if so, I saw quite many of those all around the world and I believe in this way of keeping the worldwide community alive. As long as they operate well and professionally – it’s fine.

How does your sets born? How did you add scenic elements like costumes and objects and how can you describe your performing approach on electronics?

I just look for sounds with different instruments, also look for objects in flea markets and costumes in second hand shops. And then the combination of all together is a process, which in the usually not so clear, but eventually has to bring to the certain character and his action. Sound is a medium through which this character jumps from one state of mind to other and thus keeps the intensity of here and now. The attention has to be concentrated to the maximum, where all the details has if not a meaning, then at least an effect.
Electronics is not a principal instrumentation, but somehow I stick on it. And the main thing of performing approach is just find your own way of playing it. Your own tactility, which deletes the limits between the player and the sound.

What’s the importance of humor in your work?

I think it’s the same importance as in life in general. If I can’t laugh at the reality, laugh from myself especially in the creative process, then this is really sad life… we see too much of very serious and safe art that leads to boredom. Art has to touch and change, and humor open the gates.
Also once in the astral I met other me  – he was the guy that makes lots of fun, so in the concerts you see him, not me.

Which musicians and artists (present or past) continue to inspire you?

I don’t like to forget to mention someone, but definitely my shows correlate with Bromp Treb, Id m theft able,  so they are inspirators of the one which is astral me.  But overall in recent years i saw really a lot of inspiring artists from all over the world.  Even those I didn’t like made an impact to my understanding of what I shouldn’t do, you know. So it’s constant learning. Also I must say that the inspiration for me is mostly about the way of performing. The sound itself is not so important. I don’t search for perfection in sound, I’m more interested how the artist behave with sound, what’s the distance between him and sound and what atmosphere and intensity he can bring with sound.

What planet you will conquer in a short time?
Women planet 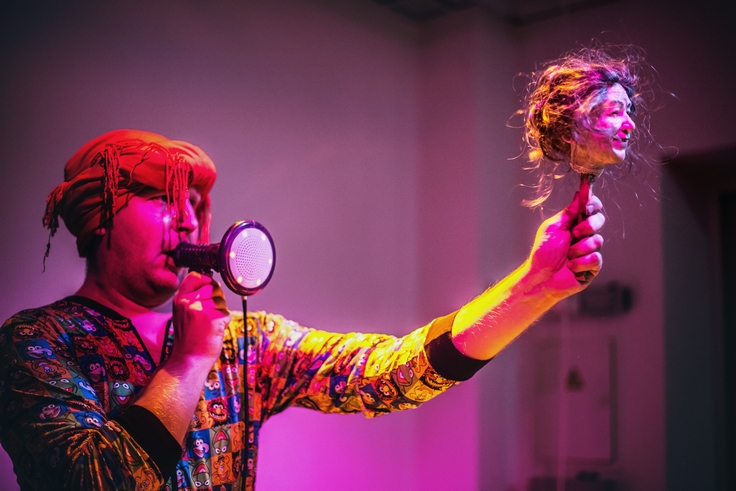